Walking around my neighborhood I occasionally see “In this house we  Believe …” signs outside homes of residents who are often white, educated, white-collar, and in the upper end of middle-class income. But in Venice, California, the sign is everywhere. Venice is a predominantly white, progressive, upper- or middle-class neighborhood.  I have yet to see this sign at a home occupied by people of color. The original sign was written by a woman in Madison, Wisconsin, for her yard. The design with colorful typography went viral in the “Pantsuit Nation” Facebook group following Trump’s victory in 2016.

The signs always struck me as pretentious, of progressives wanting others to know how superior they are, morally and intellectually. For some time, I have been thinking of writing a refute to their righteousness, to review how valid their pronouncements are. 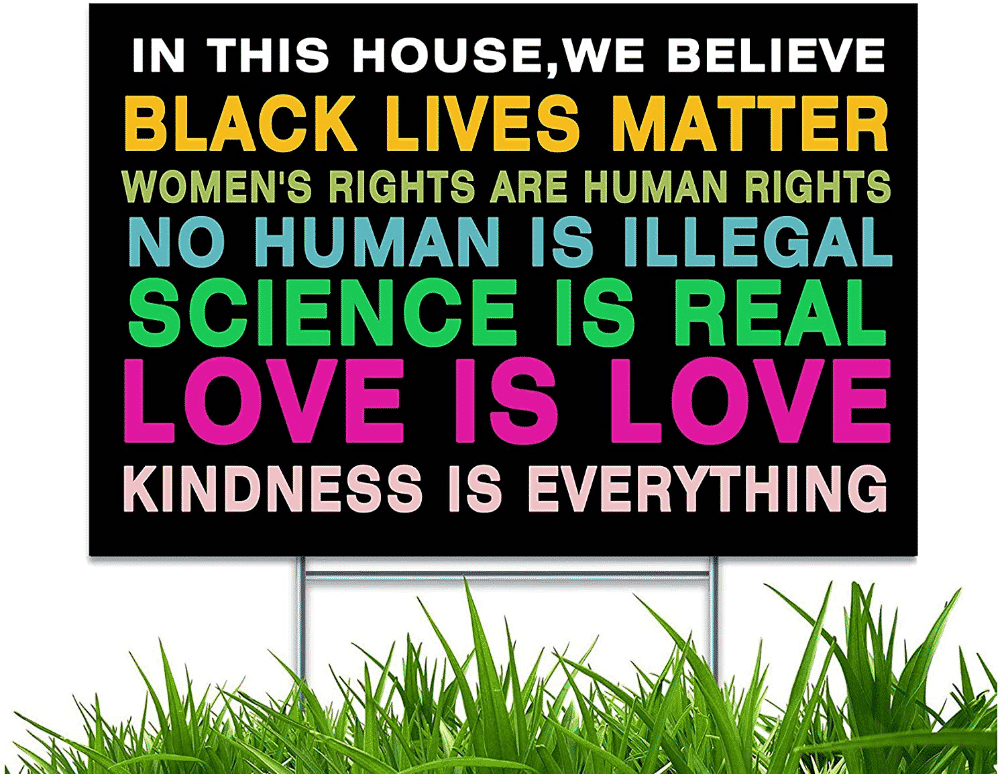 BLACK LIVES MATTER  I don’t know anybody who disagrees with this statement. But do the sign-posters really believe it?  There is an alternate organization to Black Lives Matter called Every Black Life Matters.  Its mission is devoted not to “defund the police” but to “protect black life from conception to death by confronting injustice and deconstructing barriers inside and outside the black community through a national platform of training, networked resources, community organizing and faith building.”

Those with the yard signs most likely would not support this organization.  So, in reality, their Black Lives Matter statement is hollow as it comes with conditions to avoid conflict with some of their other beliefs – some of which are stronger than others.

WOMEN’S RIGHTS ARE HUMAN RIGHTS. One more slogan agreeable by most people.  But the sign is referring to rights not accepted by everyone like “reproductive rights”, the “right” to an abortion. The other forgotten point here is that many pursuers of women’s equality do so by denigrating men. Men and women are different but complement each other.  They form the foundation of the nuclear family, another forgotten component of the slogan.

NO HUMAN IS ILLEGAL. Governments determine residency rules. Violating those rules is illegal.  So it is the act that is illegal, not the person. Saying “no human being is illegal” is a misleading slogan. Few or no participants in the immigration debate ever seriously believe that people can be inherently illegal. I doubt that adults considering immigration issues believe the term “illegal immigrant” means that. The term is understood to have a different meaning.

Activists are trying to mislead hoping to change the image/conception people have about unlawfully present migrants. They claim that the term “illegal” is demeaning. But the goal for these activists is “open borders” not less demeaning terms.

SCIENCE IS REAL. Here is another term that is used with conditions.  Science is easily dismissed when it proves inconvenient. When convenient, science is used to shoot down any discussion, never mind that science is hardly ever settled and is constantly challenged and refined. This is true for Climate Change – read the book “Unsettled: What Climate Science Tells Us, What It Doesn’t, and Why It Matters” to discuss how science is ignored.  It is likely the sign posters also support transgenderism, despite the science. There are many more examples in which progressives snub science. (We saw it often during the pandemic.)

LOVE IS LOVE. A lot of ideology, politics, and personal ethics are based on the assumption that a given course of action is loving. It is very easy for us to mistake all sorts of intense and even harmful feelings for love. What the slogan is insinuating is not love, but that unnatural sexual desires – disguised as love – should be not only tolerated and allowed but approved and accepted as normal. The latest push is support for transgenderism.

According to a report published in The New Atlantis transgenderism has zero groundings in science. Former Chief of Psychiatry at Johns Hopkins Hospital and Distinguished Service Professor of Psychiatry at Johns Hopkins University Dr. Paul R. McHugh and Arizona State University professor of statistics and biostatistics Lawrence S. Mayer co-authored the report, which found that “gender identity” is not removed from biological sex. In other words, a man cannot be born in a woman’s body or vice-versa. “Examining research from the biological, psychological, and social sciences, this report shows that some of the most frequently heard claims about sexuality and gender are not supported by scientific evidence,” prefaced the report. “The hypothesis that gender identity is an innate, fixed property of human beings that is independent of biological sex — that a person might be ‘a man trapped in a woman’s body’ or ‘a woman trapped in a man’s body’ — is not supported by scientific evidence,” stated the researchers.

KINDNESS IS EVERYTHING. Yes, we should be kind to everybody.  Will these sign posters be kind to someone who disagrees with them?  Or will they try to cancel them? My experience has been that those who post these signs are not tolerant of those who may dispute their creed.

I often wonder if the people they invite to their house ever disagree with the sign or do all their guests affirm the sign creed?

Why display them? I read an interview with sign posters and asking them why they had decided to post the sign. The universal reason was virtue signaling in the literal sense. One woman mentioned that her next-door neighbors are refugees; she “wanted to signal to them that we were welcoming.” Another woman said her family wanted to “identify ourselves as friendly and safe” while sending a message to “people who may not be sympathetic that this neighborhood will stand up for people who need it.” She recounted overhearing passersby cite her sign as evidence that “this neighborhood is nice people.” Another lady had her family and students of color in mind.

Though there is some acknowledgment of “virtue signaling” to describe the psychological impulse behind these signs. Somehow that does not strike me as totally right. Virtue-signalers do not in any way doubt their virtue. What they want to do, I think, is signal how wrong others are. I can’t see inside their hearts, but it seems that people with these signs sow more division than they do compassion. It is much more difficult to talk about the common good when people are divided along lines of race, sex, and gender.

What I see is that these signs have functionally become a secular creed for the “Church of the Woke,” a statement of political and even metaphysical belief. In my examination of every line, I found not just a statement but a dogma, whose interpretation requires a certain degree of political knowledge. The commentary about climate change, evolution, and/or vaccines intended by “Science is real,” for example, cannot be gleaned from the text itself. “Women’s rights are human rights” does not mention abortion or suffrage or sexual assault, though it certainly seems intended to address all three. In simple, practical terms, the Church of Woke is pledged to the destruction of Racism, Patriarchy, and Heteronormativity.

By creedal standards, this sign is the one for the true believers, and, like religious creeds, it is a complete package of orthodoxy to be received, not dissected. To them, this is The Truth. There is no political dissent among yard signers. No one displays an “In this house” sign with half the list struck out. If you’re in, you’re all in. There is no room for “cafeteria woke”. Those who do not conform to its catechism — the heretics — are quickly expelled or “canceled.”