Joe Biden has now been inaugurated as President of the United States and he promptly called for “unity and an end of this uncivil war.” Does he really mean to work towards uniting us? Or is his call simply for those who disagree with his politics to simply see his way?
There is no doubt that the nation is divided in religion and politics.  In his 2012 book, “The Righteous Mind: Why Good People Are Divided by Politics and Religion”, Jonathan Haidt posits that these divisions are founded on how differently the two sides view morality.

To explain the differences, Haidt establishes what he calls the Moral Foundations Theory, but first, he spends some time trying to understand what constitutes morality. He does not specifically define morality, instead tries to figure out the functionality of morals by defining what is moral and what is not. Morals are defined by Haidt as “interlocking sets of values, virtues, norms, practices, identities, institutions, technologies” that help suppress self-interest in order to make societies co-operative.

For the Catholic Church, the basic principles of morality are God-given, imbedded in human nature, recognizable by human reason and valid for all men of all times.

A good, moral Christian seeks to cultivate and practice virtue. “A virtue is an habitual and firm disposition to do the good. It allows the person not only to perform good acts, but to give the best of himself” (Catechism of the Catholic Church, no. 1803). An effective moral life demands the practice of both human and theological virtues.

Human virtues – compassion, responsibility, a sense of duty, self-discipline and restraint, honesty, loyalty, friendship, courage, and persistence – form the soul with the habits of mind and the will to support moral behavior, control passions, and avoid sin.

The Theological Virtues – faith, hope, and love – are those virtues that relate directly to God. These are not acquired through human effort but, beginning with Baptism, they are infused within us as gifts from God. They dispose us to live in relationship with the Holy Trinity. Faith, hope, and love influence human virtues by increasing their stability and strength for our lives.

Scripturally and theologically, the Christian moral life begins with a loving relationship with God, a covenant made possible by the sacrifice of Christ. The Commandments and other moral rules are given to us as ways of protecting the values that foster love of God and others.

There is some overlap between what Haidt says and the Catholic definition of Morality.  Haidt says that morality is intuitive and that we use reason to justify our morality, not to define it. 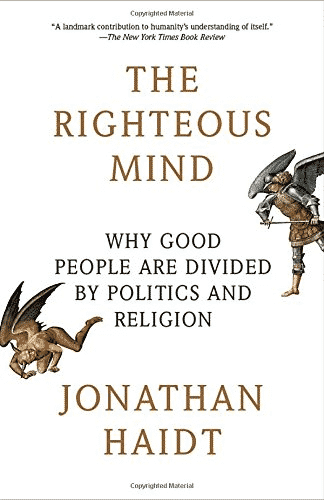 Learning right from wrong happens as we age. Morality is established in childhood and we are expected to know it by the time we reach maturity. So, how do children learn morality? Haidt explains that traditionally—and simplistically—people have answered this question with two main options: nature or nurture.
Haidt set out to find the answer to his own question of how we decide what is right and wrong and came out with his Moral Foundation Theory, based on 6 pillars – innate and universally available psychological systems – which are the foundations of “intuitive ethics.”

Here is the way Haidt describes these foundations:
1) Care/harm: This foundation is related to our long evolution as mammals with attachment systems and an ability to feel (and dislike) the pain of others. It underlies virtues of kindness, gentleness, and nurturance.

2) Fairness/cheating: This foundation is related to the evolutionary process of reciprocal altruism. It generates ideas of justice, rights, and autonomy. [Note: In our original conception, Fairness included concerns about equality, which are more strongly endorsed by political liberals. However, as we reformulated the theory in 2011 based on new data, we emphasize proportionality, which is endorsed by everyone, but is more strongly endorsed by conservatives]

3) Loyalty/betrayal: This foundation is related to our long history as tribal creatures able to form shifting coalitions. It underlies virtues of patriotism and self-sacrifice for the group. It is active anytime people feel that it’s “one for all, and all for one.”

4) Authority/subversion: This foundation was shaped by our long primate history of hierarchical social interactions. It underlies virtues of leadership and followership, including deference to legitimate authority and respect for traditions.

5) Sanctity/degradation: This foundation was shaped by the psychology of disgust and contamination. It underlies religious notions of striving to live in an elevated, less carnal, more noble way. It underlies the widespread idea that the body is a temple which can be desecrated by immoral activities and contaminants (an idea not unique to religious traditions).

6) Liberty/oppression: This foundation is about the feelings of reactance and resentment people feel toward those who dominate them and restrict their liberty. Its intuitions are often in tension with those of the authority foundation. The hatred of bullies and dominators motivates people to come together, in solidarity, to oppose or take down the oppressor. We report some preliminary work on this potential foundation in this paper, on the psychology of libertarianism and liberty.

It turns out, not surprisingly, that Liberal/Progressives ground their worldviews upon the values of “Care” over “Harm” to individuals, “Liberty” over “Oppression” and “Fairness” over “Cheating.”  And these values apply to liberal Catholics as well.  They choose Care over the Sanctity of Marriage and Liberty over the Sanctity of Life.

Liberals frequently exalt individual autonomy against community and tradition, leading to a suspicion of rules and norms that come from tradition.

Haidt says that If asked the question, do you agree that “the government should do more to advance the common good, even if that means limiting the freedom and choices of individuals”? those who answer yes are likely liberal/Progressive. Those who answer no could be either libertarian or conservative. The split between liberals (progressives) and libertarians (classical liberals) occurred over exactly this question more than a hundred years ago, and Haidt shows that the split still shows up today in the data he has accumulated through surveys.

In some way, liberals have substituted belief in God with belief in Government and their morality shows it. 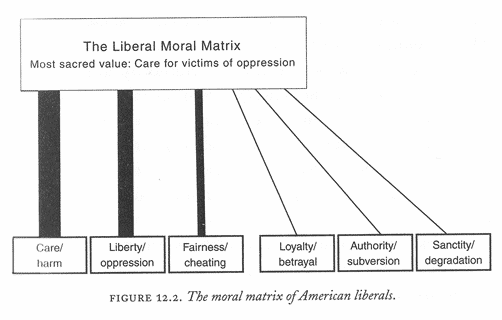 On the other hand, Conservatives, are guided more broadly by all six foundations, indicating an instinctive appreciation of moral capital.

According to Haidt – something Conservatives know – religion fosters moral behavior and moral communities are communities that last and prosper. Their residents believe “that people need external structures or constraints in order to behave well, cooperate, and thrive.” 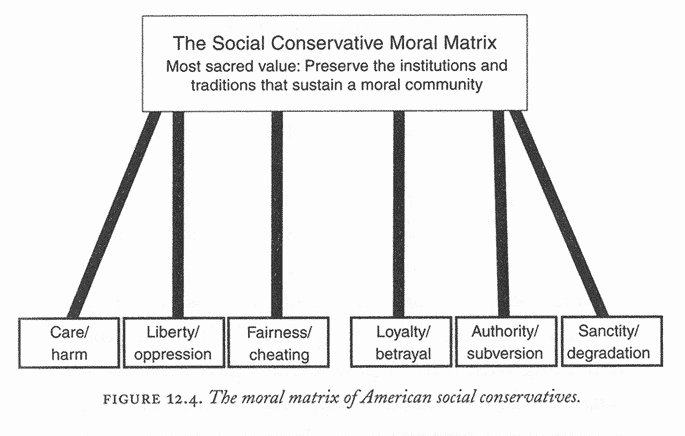 These structures sustain the community – holding and binding it together. Not knowing this, not seeing it, Haidt argues, “is the fundamental blind spot of the left. It explains why liberal reforms so often backfire, and why communist revolutions usually end up in despotism.” He concludes that, because of this unappreciation of moral capital, liberalism “is not sufficient as a governing philosophy. It tends to overreach, change too many things too quickly, and reduce the stock of moral capital inadvertently.”

At a time when some politicians seem intent on stripping away all religious influence on political life on the pretense of eliminating exclusion, this appreciation and praise of religion, is important to remember.

In his call for unity, does President Biden intend to promote the moral capital needed to accomplish it? We are called to something higher than just being nice to our neighbors — the larger goal of making good. This good depends on directing one’s life toward and for God – something his call for unity would not tolerate.

In many ways, the current polarization is sharp because it is not based so much on economic issues, where compromise can be reached, but on deeply held moral values by which people live or seek to live their lives.

As you examine the upcoming executive actions by the new Biden administration, review them in the context of these moral foundations.

Archbishop Gómez, the President of USCCB issued a statement calling to pray that God grant the President wisdom in guiding the nation.  But he also warned: “I must point out that our new President has pledged to pursue certain policies that would advance moral evils and threaten human life and dignity, most seriously in the areas of abortion, contraception, marriage, and gender. Of deep concern is the liberty of the Church and the freedom of believers to live according to their consciences.”

“As we face the moral, social and political challenges ahead for our nation, I encourage all Catholics to pray for our new president. May the Holy Spirit inspire in his heart a desire and a resolve to serve in the spirit of the Gospel, with a special concern for the most vulnerable among us, including the child in the womb. May God bless this great land with justice, peace and love.”

Corpus Christi for Unity and Peace joins in praying for our country, but it also stands ready to defend with vigor any infringement on the moral values that guide our lives as they come from God’s Natural Law: The Sanctity of Life, The Sanctity of Marriage, and the preservation of religious liberty.