Special Thanks to a Courageous Priest: Fr. Ted Rothrock

I like the month of November; it is a special month to me as it starts by celebrating the life of saints with All Saints Day.

Webster defines the word “Saint” as a holy or godly person, one eminent for piety and virtue. When I was a child, being raised in a Catholic school, All Saint’s Day meant picking a favorite saint and dressing up like them and be like them for the day. It was fun to learn about the many famous and not so famous Saints in the world.

This year, November 1, 2020, All Saints Day fell on a Sunday and after hearing Mass, I kept thinking about some priests who are living saints in our world today. One of those priests, Fr. Ted Rothrock, deserves our recognition and appreciation as he has courageously answered God’s call to shepherd His flock by choosing to use his God-given talent to speak God’s truth, encourage his children to resist evil and choose the virtuous life, the Saintly path. Learn more about Fr. Ted Rothrock (Scroll down to “How We Began”)
My family has known Fr. Ted for a long time. He was the pastor of St. Elizabeth Ann Seton in Carmel, Indiana, the church we attended since my husband and I moved to Carmel in 2000. Fr. Ted baptized my daughter, was a notable character in my father-in-law’s conversion to Catholicism, and even presided over my father in-law’s funeral.

My husband and I have always admired Fr. Ted’s great intellect and knowledge as noted in his sermons and bulletin writings. We love how passionate Fr. Ted is and applaud his courage for always teaching from his heart, despite the pressure of today’s society and political correctness.  Fr. Ted boldly warned us about some current radical organizations that on the surface appear to call for justice, pointing out their underlying anti-catholic agenda and the dangers of following their leaders, referring to them as wolves in wolves clothing. We can feel the presence of the Holy Spirit through him.

Fr. Ted Rothrock is now the pastor of St. Paul Catholic Church in Marion, Indiana. I was blessed with the opportunity to sit down and speak with him the day before Thanksgiving Day. I am happy to report that he is doing well in his new parish.

During the meeting, I shared with him CUP’s mission and the story of how CUP was inspired by his suspension. I showed him the photographs of the various prayer events that CUP supporters held so that his priestly duties can be reinstated. I presented to him a CUP T-shirt that was signed by a few of our members, as well as a copy of the comments that well wishers placed on our website. He was deeply touched by all the love and support. He intently read every comment and, with a big smile on his face, said, “I will cherish this special gift for the rest of my life.” He openly shared with me his prophetic wisdom to help us in our mission. He said, “God calls on some people to be prophets and although they may be reluctant at first because of fear… if you know and believe that the Holy Spirit has called you to do God’s work… then God will provide whatever you need.”

He then shared with me several stories where he has witnessed and experienced this truth, which constantly remind him to trust in God.

He said that St. Paul Catholic Church was never on his radar but God, in his infinite wisdom, placed him where he was needed most. He spoke about how surprised he was of the level of poverty he found in Marion;  a level, he feels, is in the caliber of the poverty he saw in Haiti. He spoke of poor  people living in rows of abandoned homes, afflicted by addiction, and suffering. But amidst this poverty, he has witnessed joyful people doing God’s work at St. Martin de Porres Community Center. He encouraged me to spend some time there to witness how the poor are being spiritually and physically blessed by volunteers, who are actively doing God’s work to provide for their needs. I promised to visit the center and see how my family can help. Fr. Ted once again showed me how compassionate and merciful the heart of Jesus is.

Also, Fr. Ted explained that being Catholic is open for all to be one with God. He said, “I know this sounds Protestant-ish of me but let the biblical word of God be your guide in your mission. There are truly demonic forces out there that want to separate God and His church teachings from his people. Jesus said ‘Do not be afraid… Not a hair on your head will be disturbed.”  Throughout our talk, he repeatedly emphasized the importance of using the biblical word of God as our spiritual guide, as well as living the Sacraments of the church, which are gifts from God to the Catholic Church. And the experience of spiritual dryness that he felt during the time that he could not perform his priestly duties made him realize, even more, God’s desire for people to always have access to and receive the Sacraments of the Catholic Church. This is for our soul’s eternal salvation.

My thanks go to Fr. Ted for taking the time to meet and have a dialogue with me, it was very encouraging and delightful. On behalf of all of the CUP supporters, we thank Fr. Ted for inspiring us to pursue CUP’s mission: which ultimately is to unite people to the heart of Jesus for salvation and everlasting peace by promoting a culture that safeguards the dignity of every human person.

In the words of Fr. Ted, “Let us not allow fear to keep us away from God and doing God’s work. Trust in Jesus.” 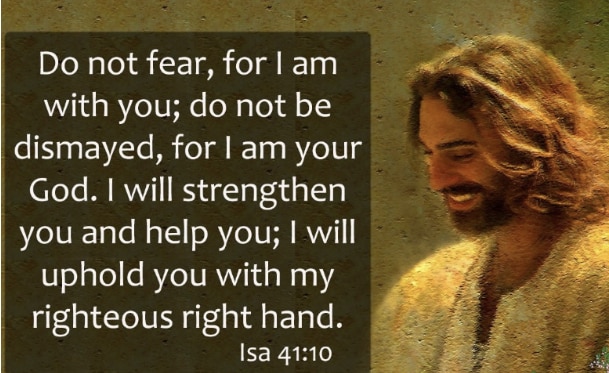