Reflections of Abortion Testimonies at the Indiana Statehouse 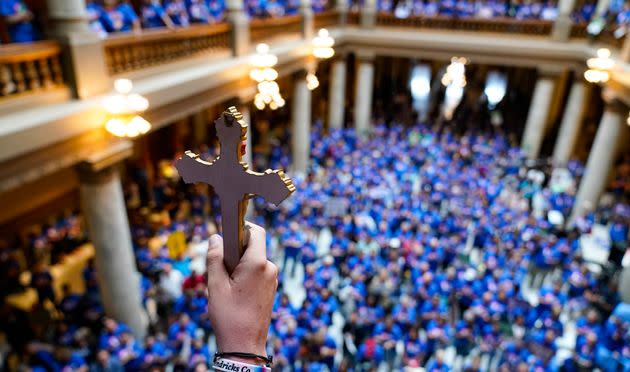 On Tuesday, August 2, 2022, I endured three hours in the Indiana House Chamber gallery listening to testimonies regarding the Indiana Abortion Bill called SB 2. Due to the overturning of Roe v. Wade, the Indiana legislators were free to rewrite Indiana Code regarding abortions in the state. I want to share with you my thoughts.

SB 2 had passed out of the Senate the week before, a week of raucous demonstrations by large crowds of pro-death individuals who outnumbered the pro-lifers. I was not able to be present due to being in Virginia with a score of my grandchildren. SB2 was now in the House.

As I approached the State Capitol I wondered if my trip downtown was a waste as there were plenty of parking spots within a block or two of the Capitol and no crowds to be seen. Then I noticed Indiana State Police were stationed all around the two-block grounds that the impressive Statehouse rests upon.

As I cut through the grounds to enter the imposing East entrance I came upon a group of 20 or so pro-death people posted about with their signs, plus more State Police. In total, there were easily 50 Indiana State Police within and outside the Capitol. I made my way to the 2nd floor, where the entrance to the House chamber is located, and saw Vicki Yamasaki, the Corpus Christi for Unity and Peace leader, who expressed disappointment with the small pro-life crowd. Just adjacent to her were about 50 noisy pro-death advocates crowded about the chamber entrance.

I made my way to the 3rd floor where the gallery entrance to the House Chamber is located. To my amazement, the doorkeeper stated I could enter and I saw the gallery only half full. The gallery was roughly divided between the blue shirts and the green shirts. The blues were pro-life and the greens were pro-death. I like to think the blue represented Our Lady’s color, and the green the color of death. I was delighted to see a half dozen blue shirts from St. Luke parish in Indianapolis. 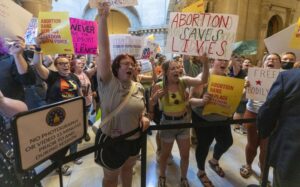 After reviewing the seating I chose to sit by myself at the end of a row beneath a loudspeaker. The row contained three or four green shirts, all wearing COVID masks, apparently a part of the uniform. My blue shirt, with a Padre Pio “Pray, Hope, and Don’t Worry” logo provided a bit of balance to the green shirts.

Statehouse decorum dictates silence from the gallery. While it was initially silent the green shirts found an annoying way around the restriction: instead of clapping or cheering they raised both arms and rapidly twisted their wrists to sign approval of what was said; a thumbs down sign signaled disapproval. Very few thumbs-down signs were given. Why were very few thumbs-down signs given? Well, of the 130 or so three-minute testimonies given probably only 10 percent were given by pro-lifers. During the three hours I witnessed in the gallery of the 9 or10 hours of testimony, very few testified from a pro-life standpoint.

I managed to mentally drown out the seemingly endless chatter of the pro-death testifiers with the recitation of several rosaries. The speakers included scores of doctors and medical personnel, leaders in health care roles, nearly all of whom had no problem with the killing of the unborn, many at any stage of gestation. One of the most disheartening testimonies was by Dr. Philip Eskew, the former founder, and director of St. Vincent Hospital’s OB/GYN program from 1974 to 2007. His testimony featured his siding with abortion as a solution for girls facing unwanted or forced pregnancies. What a horrible witness from a former leader in the premier Catholic Hospital of Indianapolis. This “esteemed” witness is a scandal to the Catholic Church and a nail in the coffin of Bishops’ failed oversight of supposedly Catholic Institutions within their jurisdiction. It was so aggravating to see the tattooed woman next to me covered with numerous tattoos on her arms and legs wildly waving her wrists in approval of this scandalous testimony.

Finally, after all the medical “experts” finished their tired and worn-out pro-death jargoning, non-medical people were allowed to speak. One young man, representing a Fort Wayne church and who has done sidewalk counseling, gave an impassioned plea that God’s creation of sacred life should be respected. He was one of the few who called upon almighty God for consideration in the debate and one of the few who viewed the issue from the baby’s side. He was heckled from the floor and the tattooed lady next to me stood up and shouted at him, earning a rebuke from the Committee Chairman Wendy McNamara of Evansville conducting the hearing.

CHECK OUT VICKI YAMASAKI’S TESTIMONY BEFORE THE HOUSE

Probably more disturbing was the incessant chanting and cheering emanating from outside the 2nd floor chamber by the Pro-Death braindead, inspired by Satan himself. I strongly felt the presence of Satan while in the gallery, clutching my rosary as an antidote. The loud cheering from the floor below interfered with my hearing the speaker in the gallery. I asked the doorkeeper on my way out if something couldn’t be done, as a person like me with a hearing disability my rights to hear the proceedings were negatively affected. She stated they had the freedom of speech. I said, “Oh, you mean I can stand right here and shout as loud as I please?” She responded, “Oh, please don’t do that!”

After arriving back home I found the online live streaming of the hearing. The very last speaker, who missed his earlier time slot, was Alexander Mingus, Associate Director for the Indiana Catholic Conference, representing the Indiana Catholic Bishops. Talk about disappointment. He lacked passion, and no identifiable empathy with the unborn, other than stating the “ICC supports the general prohibition of abortion.” He stated the ICC supported the exception for the life of the mother, but that it needed clarification. Additionally, he thought the bill could improve the exception for lethal fetal anomalies. I got the impression he was paid to speak. This was his first testimony on the bill; for some unknown reason, he did not testify when the bill was in the Senate. For an issue as historic as this, it would have been appropriate, to say the least, if at least one Indiana Bishop had testified before the legislature. As of this writing, SB1 has been passed by the Indiana legislature, and the bill, now known as SEA1 was signed by the Republican Indiana Governor within an hour of its final passage. The following is a summary of the bill extracted from ICC’s August 7th statement.

On August 5, Governor Eric Holcomb signed SB1 into law after it passed the Senate 28-19. This new law, SEA1, goes into effect September 15, 2022, and will ban all abortions surgically or with an abortion inducing drug except in cases of :

(A physician written certification is required in all these cases.)

While this legislation is estimated to eliminate 95-98% of abortions according to estimates provided by Indiana Family Institute and Indiana Right to Life, there is still more work to do.  All babies have value, those that are conceived out of rape and incest and those diagnosed with a fatal fetal anomoly.  Our work is not done.  So while this may appear to be a “victory,” vigilance will be required by the pro-life movement well into the future. The pro-death forces have the forces of the God-less education system on their side to keep churning out brainwashed young people into society. It seems to this writer that if the Indiana Bishops were seriously intent on totally stopping the killing of God’s innocent souls, they would tell the whole truth. The whole truth is that not a single Democrat in the Indiana Legislature voted in favor of the new abortion bill. Additionally, some of the Republicans who voted against the bill did so because they believed the bill did not go far enough in protecting the innocent. Stating this fact is not being political – it is the Truth. However, to deliberately not state this information IS being political. There is a disconnect between what the Church proclaims and how it acts. Following the signing of SEA1, prayers of the faithful at Masses were heard regarding abortion that were the same as before, as though nothing had changed. Where is the relevance?

Oh God, we pray you guide our religious leaders to be truthful, rather than political; to immerse themselves into the womb and accompany the innocents as they struggle toward the Light. 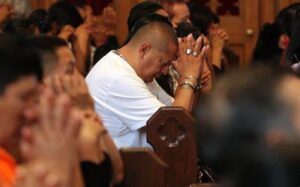