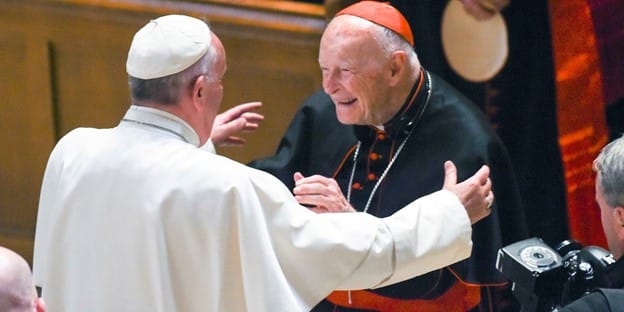 The Vatican has finally released the long-awaited and long-delayed McCarrick Report. The 450-page document is touted in its introduction as a thorough examination of how this man, Theodore McCarrick, became a powerful and influential cardinal archbishop of the Diocese of Washington, D.C., and the leading figure in the American Church’s post-sex-abuse reforms all while his habit of sexual abuse were known to so many in the church.

Instead, the report is replete with bureaucratic sentences aimed at protecting the establishment. It feebly attempts to put blame on a handful of priests in New Jersey, mostly deceased, and it sort of blames (but excuses), the deceased and sainted Pope John Paul II. And, in a sort-of expected move, the Report also lashes out at Archbishop Carlo Maria Viganò, who has for the past several years played the role of whistleblower.

In a review of the report in Crisis Magazine, Declan Leary, writes:

The real, dramatic moral rot is relatively rare. Men like McCarrick are the epicenter of such crises, but they are not the bulk of them. It’s the secondary sins that are significant to us, because these are the ones that are institutional—that speak to the ill health of our Church more than the evil of one man. McCarrick’s allies lying to one pope to protect one of their own. That pope’s refusal to believe, even in the face of evidence. The next pope’s failure to take decisive action. The McCarrick story is as much about the weakness of our leaders, and about a corrosive kind of in-group loyalty among them—I refuse to call it “clericalism,” but it’s something like what people mean by that term, on the occasions that it’s used in good faith—as it is about abuse.

This is no great revelation. This is the Church we have come to know.

The Report has attempted – and restricted itself – to answering these three questions:

(1) Why did John Paul II make McCarrick an archbishop even as Cardinal John O’Connor of New York warned the pope against this in a letter asserting that McCarrick was a sex abuser?

(2) What exactly did Benedict XVI do about McCarrick?

By limiting the report to answering these questions, one can determine that the report is aimed at explaining away and confounding existing stories in the media that are inconvenient to the current pope and to lay blame elsewhere. The report makes no attempt to bring accountability to Church leadership who knew of McCarrick’s abuses. It is all nuanced and passive so as to be inconsequential.

Mr. Leary expresses the disappointment of many Catholics on the flaws of the institutional church, where retention of power and external appearances has utmost importance – even above and beyond faith and dogma: 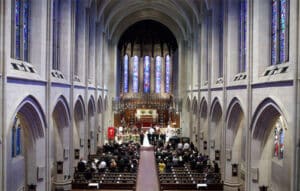 But what really wounded me, what really threatened my faith, was the realization that men I had always admired—John Paul and Benedict in particular—were tied up in it all. As time has gone on and more has come to light, the picture here has only worsened. John Paul could have done something. At the very least he could have neglected to advance McCarrick, to say nothing of punishment. But he didn’t. This fundamental weakness, which clearly affects even our saints, is the major cause of the corruption in our Church—not the evil of men like McCarrick. Such men cannot do harm if they are not allowed to. The only thing necessary for the triumph of evil…

The Report does not cover two of the main concerns of McCarrick’s influence:

(1) Why was McCarrick, even after suspected of misconduct, continued to act as a representative of the Vatican in delicate international talks, most notably in negotiations with China. The Report attempts to deflect that charge, saying that “McCarrick was never a diplomatic agent of the Holy See.” Yet, the Report concedes that McCarrick, though not on an official capacity, was engaged in “soft diplomacy” because, the Report says, he was “an exceptionally hard-working and effective bishop able to handle delicate and difficult assignments both in the United States and in some of the most sensitive parts of the world—including in the former Eastern Bloc and particularly Yugoslavia.”

(2) Was McCarrick’s rise through the ecclesiastical ranks attributable to his legendary success as a fundraiser bringing enormous contributions to the Vatican?

The report flatly denies that theory, claiming that although McCarrick’s fundraising skills were weighed heavily, they were not determinative with respect to major decisions made relating to McCarrick, including his appointment to Washington in 2000. The Report also contends that the examination did not reveal evidence that McCarrick’s customary gift-giving and donations impacted significant decisions made by the Holy See regarding McCarrick during any period.

• How was it that while McCarrick was fending off lawsuits and accusations of sexual abuse, the future cardinal living with him claimed, implausibly, to have no knowledge of anything beyond what he terms sordid rumors?

• Why was McCarrick — so well-known for his reputation — living at a seminary in his retirement?

• What exactly did Cardinal Donald Wuerl, then archbishop of Washington, D.C., know?

• Why does McCarrick own multiple houses on the Jersey shore?

• Why did Vatican inquiries into seminaries during these decades not uncover the widespread culture of sexual license and abuse in many of them?

The Report is also guilty of many omissions:

• It does not acknowledge and celebrate O’Connor and Vigano for exposing the abuse. By not doing so the Report misses the opportunity to send a strong message that exposing evil will be rewarded in the future.

• It does not unite their clergy and church leadership. • It does not address the changes in priest culture needed to root out homosexuality from its ranks.

• It does not identify and hold accountable those bishops who swept the abuse under the rug.

• It does not issue a commitment to the laity that the Church will investigate every claim of sexual misconduct by any priest and carry it out with transparency.

What, I wonder, was the point of this report? Michael Brendan Dougherty writing for National Review Online gives the best answer:

But that gets to the error behind the report. What is “institutional knowledge” and “decision-making”? The report is a kind of prophylactic against a real investigation. Instead of confessing to the Church the sins of its leaders with a degree of candor and humiliation, the report tells outsiders, if you looked at these selected documents, this is the most you could possibly prove against us. Ultimately, the report itself is a kind of moral heresy.

Instead of approaching the McCarrick case in a forensic — yes, inquisitorial — way, judging the bishops of the Church as men who have duties to the Church and God to confront evil, based on what we know, we have this petty bureaucratic account. 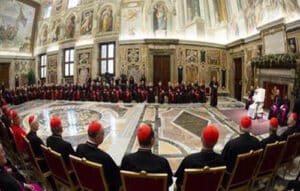 Despite the disappointment of the Report, I urge you to meet what the Church faces with faith. As Deuteronomy 31:6 says, “Be brave and steadfast; have no fear or dread of them, for it is the LORD, your God, who marches with you; he will never fail you or forsake you.”