Admonishing the Sinner, Rooted in Love

The Sin of Omission

Someone shared with me recently how she agonized over whether to attend her child’s wedding (with her same-sex partner).  She said – what should I do?

To which I replied “The only charitable thing to do in this situation is not attend the wedding.”

What did I say? Yes, you heard me right.  Not attend the wedding.

She should love her child so much to let her daughter know that what she is doing is destroying her soul.

My friend said “I don’t want to create a conflict.  I will probably just attend the wedding and keep quiet.”

To this I said with great love and compassion “Are you more concerned with how they will think about you or about the salvation of their souls?” 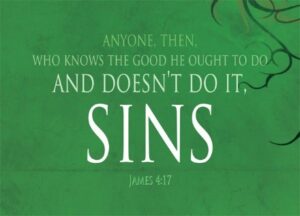 The reality is we are so afraid of the consequences of telling the Truth and how we might suffer that we prefer to take the path of least resistance.

She was shaken by this statement. But, think about it for a moment.  If this young woman’s own mother goes along to get along and remains silent about this disordered act, not only is she complicit in this grave sin, but she is condoning it with both her daughter and her supposed partner.

It is important to recall what Pope Emeritus Benedict XVI  said when, as Cardinal Ratzinger prior to becoming Pope, helped draft “Considerations Regarding Proposals to Give Legal Recognition to Unions Between Homosexual Persons”[1]:

“The Church teaches that respect for homosexual persons cannot lead in any way to approval of homosexual behaviour or to legal recognition of homosexual unions. The common good requires that laws recognize, promote and protect marriage as the basis of the family, the primary unit of society. Legal recognition of homosexual unions or placing them on the same level as marriage would mean not only the approval of deviant behaviour, with the consequence of making it a model in present-day society, but would also obscure basic values which belong to the common inheritance of humanity. The Church cannot fail to defend these values, for the good of men and women and for the good of society itself.”

What conversation do you need to have that is difficult with a family member, neighbor, friend, or priest? We are called to speak the truth with love.

A Future Riddled With Sin and Distress

Let’s stay on the topic of this gay couple wanting to marry and explore their future for a family, if they even have a desire for one.  This disordered couple cannot have their marriage blessed in the Church as was affirmed by the Congregation of the Doctrine of the Faith recently[2].  This couple cannot procreate and give life to a child, the fruit of marital sacramental love.  Unlike same-sex couples, a man and a woman who marry learn to love more selflessly:

” As this happens, they create an environment of love that becomes more generous; more life serving. The focus of their love expands to welcome and nurture new life. In other words, they create a family. Then together the family grows in selfless, Christ-like love, and parents lead their children through their own love to the very love of God.

The very reason that society gives special status and special benefits to marriage [between a man and a woman] is because family is meant to flow from marriage. Studies have shown time and time again that there is no better school than the family supported by marriage for the creation of healthy, active citizens who will look out for each other’s good.”[3]

Given that a same-sex couple cannot procreate with each other, they then seek alternatives which violate Natural Law, including the use of third parties to assist one of the women in the same-sex couple with becoming impregnated through reproductive technologies that are contrary to Catholic teaching.[4]

Perhaps this couple seeks to adopt a child.  Ever since the tragic Supreme Court decision of Obergefell v. Hodges granting same sex couples the right to marry there has been an expansion of power by gay rights activists insisting they have equal protections at the detriment of those who hold tightly to their religious beliefs.  These expanded rights include adopting children from Christian adoption agencies that restrict adoption to couples between a man and a woman due to religious beliefs.

It was a very tragic day when a federal judge sided with the city of Philadelphia and same-sex foster and adoptive parents stating that religious adoption agencies cannot exclude same-sex couples[5].  The judge’s decision further concluded the adoptive agency was no longer entitled to receive public funding.  Unfortunately, Catholic Social Services and Bethany Christian Services lost on appeal, striking another setback. Why is it then surprising that just in the past few weeks, Bethany Christian Service, the largest protestant adoption agency in the U.S., decided to reverse course and accept nationwide LGBTQ couples as adoptive parents?[6]  In the National Catholic Register it stated Bethany Christian Services would further modify its agency’s 2007 statement that “God’s design for the family is a covenant and lifelong marriage of one man and one woman,” according to the New York Times.

So now the floodgates are open for religious adoption agencies to place children with same-sex couples and transgenders.  Research shows that homosexual parenting harms children, placing them at four times the risk of emotional distress[7].  Fr. Paul Sullins pointed out in the Survivor’s Summit (held in April 2019) in his extensive research on the study of children who live with homosexual couples:

“The possibility of children is built into a conjugal relationship, but in a CR relationship, children are external. They are an add-on if you want them.”

Children of same-sex couples are: 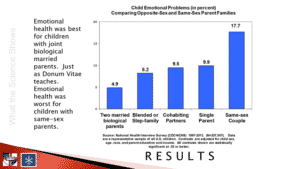 Silence from our Priests

What have we heard from most of our clergy on these matters?  Nothing.

Unfortunately, all we have heard are from zealot priests and prelates and even our pope who are supportive of homosexual unions.

The flock is in desperate need of spiritual guidance as we search for pastoral leadership to paint the lines on the road so that we have boundaries.  We look to them to make straight the crooked paths (Isaiah 45:2).  Yet most of the clergy (with cassocks of all colors) remain SILENT on the issue of same-sex unions/marriages and adoptions by LGBTQ individuals.  Worse yet, certain bishops and priests condone it!  The appointment of Cardinal Tobin as a member of Vatican’s Congregation for Bishops is yet another blow for TRUTH and Catholic orthodoxy.

Homosexuality is intrinsically disordered.  We need our priests to speak out courageously about the scriptural foundation of living such disordered lives.

The culture of death in which we are living has convinced the majority of Catholics to believe that living in same-sex unions is acceptable.  When asked by the Pew Forum in their Religious Landscape Study, 57% of Catholics say they strongly favor/favor same-sex marriage while only 34% oppose or strongly oppose it.[9]

We have lukewarm Catholics sitting in our pews who are more dangerous than the atheists.  At least with atheists we know which side they are on and easily oppose their belief system.  But with lukewarm Catholics who accept same-sex marriages and homosexual acts as acceptable behavior we have the most dangerous type.  They are leading our next generations astray.  This is why it is imperative we have priests speak up on scripture and our Catholic tradition.

When was the last time you heard your priest reinforce the following?[10]:

2357 Homosexuality refers to relations between men or between women who experience an exclusive or predominant sexual attraction toward persons of the same sex. It has taken a great variety of forms through the centuries and in different cultures. Its psychological genesis remains largely unexplained. Basing itself on Sacred Scripture, which presents homosexual acts as acts of grave depravity, tradition has always declared that “homosexual acts are intrinsically disordered.”  They are contrary to the natural law. They close the sexual act to the gift of life. They do not proceed from a genuine affective and sexual complementarity. Under no circumstances can they be approved.

2358 The number of men and women who have deep-seated homosexual tendencies is not negligible. This inclination, which is objectively disordered, constitutes for most of them a trial. They must be accepted with respect, compassion, and sensitivity. Every sign of unjust discrimination in their regard should be avoided. These persons are called to fulfill God’s will in their lives and, if they are Christians, to unite to the sacrifice of the Lord’s Cross the difficulties they may encounter from their condition.

2359 Homosexual persons are called to chastity. By the virtues of self-mastery that teach them inner freedom, at times by the support of disinterested friendship, by prayer and sacramental grace, they can and should gradually and resolutely approach Christian perfection.

Perhaps you are like my friend who wants to go along to get along.  Our silence on such grave matters with the priests of our parishes and within our communities equals complicity.  We can no longer sit idly by and allow the dark side to voice their concerns while we remain silent.  We must be the squeaky wheel.  This is how change happens.  We cannot allow these diabolical acts to continue without calling them out as sinful and using every influential means we have for recourse.  Praying is effective but Christ calls us to practical ways to counter evil.  Above all, we must speak truth with love. For without love, we are nothing.

We should recall the Spiritual Work of Mercy:

To admonish the sinner is not to belittle or humiliate him, but rather to alert him to the danger of a sinful course of action. It is rooted in love, not pride.