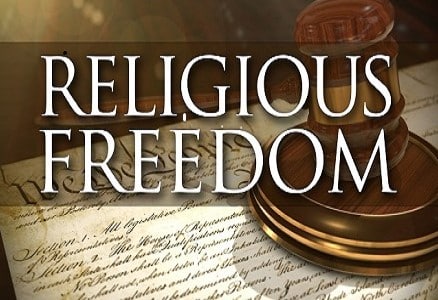 Today, citizens of our great country celebrate our national holiday—the Fourth of July—Independence Day.  This year, more than ever, people of Faith—not just Catholics—but all people of Faith are mindful of the threats to our religious freedom.  The right to “life, liberty, and the pursuit of happiness” as “one nation under God.”  Of course, this has been brought on by the controversy over the Supreme Court’s defeat of Roe vs. Wade.  Some people are outraged that the Court rightly ruled there is no constitutional right to kill innocent life in the womb.

While it’s sanctity of life issues in the forefront, it’s about more than human life issues.  This is about religious freedom, the primacy of conscience, “life, liberty, and the pursuit of happiness.”  The U.S. Supreme Court made two rulings in this favor last week:  One, the High Court that a football coach in the State of Washington was wrongly fired because after games he would “take a knee” and pray on the field to pray.  Second, the Court ruled unconstitutional a law in Maine that restricted educational vouchers only for non-religious schools.  The Court said it was discrimination against religious practice not to include religious schools.  These two cases are great.  But we wonder then why in the world they even needed to come before the Court!  How did we sink this far?

Bishop Frank Dewane is the Bishop of the Catholic Diocese of Venice, Florida.  Like many priests today, Bishop Dewane had a professional career before he entered the seminary.  Frank Dewane worked for a while for NBC in Moscow.  Recently, the bishop reflected on his time living in Russia a dozen years before the Iron Curtain fell.  Bishop Dewane said that while he lived in Russia he enjoyed perfect “freedom of worship.”  He went to church every Sunday; there was no problem in attending Mass.  But no one had “freedom of religion.”  People were not free to practice their religion—follow their consciences—make free moral choices without unnecessary government interference.  Even though they could worship when or where or how they pleased.[1]  This is one of the word games coming out of Washington:  Freedom of Worship does not guarantee Freedom of Religion!

And make no mistake:  religious freedom is the issue.  For years, we have fought the battle for the Sanctity of Human Life.  We marched on Washington every year to protest the 1973 Roe vs. Wade decision by the Supreme Court.  And, since God is on the side of human life, we won.  But the overall battle is not over yet. 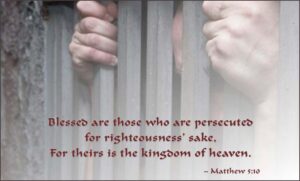 But now we move beyond just defending human life.  We have moved into the defense of spiritual life.  The core of our souls—our conscience before God!  The battle expands today to include our spiritual lives.  We fight to defend our very souls.  Our cause today defends the right of every human person to religious freedom, and to make decisions according to a well-formed conscience.

This lunacy—attempts to destroy religious freedom—have backfired.  Those with twisted thinking that has no respect for life period—any life—human or Divine, temporal or spiritual, have pushed too far.  Scripture tells us “Blessed are those who are persecuted for the sake of righteousness, for theirs is the kingdom of heaven.”

Today we thank God for our country, our liberty, our independence.  Thank God for our Church, at least one voice willing to speak for God, for the sanctity of human life, the primacy of spiritual life, independent of what any government or anyone else thinks.  Only in America could this be so.  In spite of it all, we have much to be thankful for.  God bless America!