Preserving the Sanctity of Life at the End 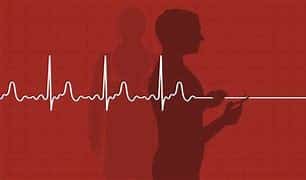 Every Sunday I turn right at a certain busy intersection.  For decades, the city had a “no turn on red” sign there because geography makes cross-traffic hard to judge.  The city recently removed the sign, but I still don’t turn on red.  That is one of my legal options.  Drivers behind me sometimes try to change my mind with honking horns, hand gestures, and shouted epithets.  My health care decision to not turn on red elicits this coercion even though it costs these people at most a few minutes of their time.  How much coercion would you expect if the costs and benefits of someone’s health care decision were much larger? 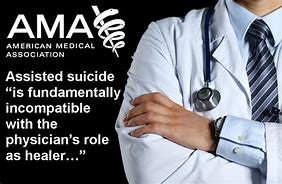 Patients, especially those near the end of life, in the United States today have several so-called health care options for ending their own lives intentionally and knowingly.  Prominent among these options are two methods of assisted suicide: doctor-prescribed suicide and various ways to refuse food and water (usually enabled by doctor-assisted hospice care because this method is painful).  With doctor-prescribed suicide, a doctor prescribes a lethal dose of drugs for a patient who then swallows the drugs at will.

The stakes are high.  A patient who chooses life and a natural death may need help from family, friends, and caregivers; expensive medical treatments and legal assistance; and hospice care.  This choice to treat illness and end pain entails true compassion, a beautiful gift to give and to receive.  Choosing life can buy time for correction of a misdiagnosis or the development of a cure.

A patient who chooses death foregoes those benefits and might also forego [par. 2281] just love of self, love of neighbor, and love of God.  In exchange, he might gain a feeling of autonomy or of ending a life that he deems unworthy of life.  This choice financially benefits heirs and the health care system.  It also ends the responsibilities of the patient’s family, friends, and health care system to the patient.

We might understand [par. 2283] a completely voluntary “health care” decision to end one’s life.  But what if that decision is coerced?  Our society tends to make what is allowed mandatory.

Some forms of coercion, intended or unintended, are mild and subtle.

Many people mistakenly believe that whatever is legal is moral.  What will they think about assisted suicide when they learn that it is legal?  The Supreme Court reclassified tube feeding from a necessity of life to a medical treatment that can be withdrawn.  Doctor-prescribed suicide, a crime throughout the United States until 1997, is now a medical treatment in ten states (CA, CO, HI, ME, NJ, NM, OR, VT, WA, MT) and the District of Columbia.  A Nevada law lets a person order his future caregivers to starve and dehydrate him to death if he becomes demented.  No law bans voluntarily stopping eating and drinking accompanied by doctor-assisted hospice care.  A 2018 Gallup poll found that 54% of Americans think doctor-prescribed suicide is morally acceptable.

A weak and vulnerable patient is susceptible to suggestions from those he trusts.  How will such a patient feel if a trusted family member or friend mentions to him that assisted suicide is one “health care” option worth considering?  Might the patient infer that he has a duty to die to avoid being a burden?  With Jane Gross’s encouragement, her mother ended her own life by voluntarily stopping eating and drinking. 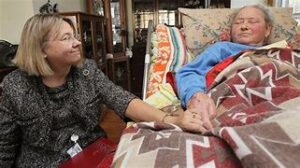 Other forms of coercion are harsher and indirect.

The Oregon Health Plan (Oregon’s Medicaid program) would not pay for Barbara Wagner’s [p. 20] expensive doctor-prescribed chemotherapy but would pay for her inexpensive doctor-prescribed suicide.  She couldn’t afford to pay out of pocket for the chemotherapy.  If you were in Barbara’s position, would you feel like you were being pressured to request assisted suicide?

Still, other forms of coercion are harsh and direct.

Terri Schiavo was forced to die from dehydration because a judge gave more weight to hearsay evidence than to her family’s plea to let them give Terri the tube-feeding she needed.  This despite support for the family’s plea from Pope John Paul II, the Vatican, Florida governor Jeb Bush, the U.S. Congress, and U.S. President George W. Bush.

Michael Hickson was forced to die from pneumonia and dehydration because a hospital committee decided that his low quality of life (resulting from his pre-existing quadriplegia and head injury) precluded doctors from giving him antibiotics and tube-feeding.  The committee discriminated against Michael because he was disabled.

Many patients presented with suicidal “health care” options are old or disabled.  An (under)estimated 10% of people aged 60 and older who live at home are abused.  Many disabled people feel emotional and financial pressure to end their lives.  Our health care system increasingly discriminates against both groups because it considers them to have a poor quality of life.  Do you think that some of these patients might be coerced into choosing assisted suicide? 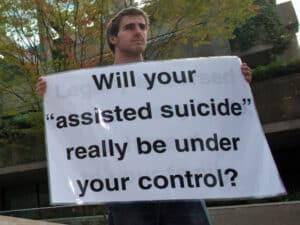 At first glance, state laws legalizing doctor-prescribed suicide seem to protect a patient from coercion.  But do they?  Are patients in Oregon protected from coercion?

A patient in Oregon who wants doctor-prescribed suicide must make three separate requests [127.840 s.3.06]: two oral and one written.  Oral requests can be made by phone and written requests can be sent by mail.  Could these requests be made under duress?

Oregon’s laws do not protect [p. 259, Q567] a patient after a doctor’s prescription for lethal drugs is filled.  Could someone other than the patient administer by force or by trickery the lethal drugs to the patient?  Barbara Houck died voluntarily from a doctor-prescribed drug mixed with chocolate pudding after Barbara’s son spoon-fed the mixture to her.

Oregon’s laws have been violated.  In 2004, Dr. Katrina Hedberg (lead author of many of the Oregon Health Authority’s official reports) testified [p. 257, Q555] about the Health Authority’s role in Oregon’s doctor-prescribed suicide program:

“… we are not a regulatory agency, at least not in this regard, so if we see that there are problems that have happened, and there have been a number over the years, … our role is to report that to the Board of Medical Examiners … .”

“… the possibility of physician recall bias must be considered.  …  For that matter, the entire account could have been a cock-and-bull story.  We assume, however, that physicians were their usual careful and accurate selves.”

What You Can Do

God sanctifies and dignifies every human life, from conception to natural death, by creating us in His image [v. 27] and by living [v. 16] in each one of us.  Jesus became man, died for us, and conquered death so that we might have life [v. 10] and have it more abundantly.  Sanctity is intrinsic to human life and is a quality, not a quantity.  Hence God’s commandment [v.17]: “You shall not kill.”

Let’s celebrate God’s wondrous gift of life by practicing [Ch. 4] unconditionally the culture of life [39], which welcomes life and protects it from attack.

What can you do if you think that suicidal “health care” options should be eliminated because they entail a significant opportunity for coercion or any other reason?

First, inform yourself.  The Patients Rights Council offers facts on suicidal “health care” options and information on precautions you can take to protect yourself and those you love from coerced health care decisions.  Articles, books, and videos by Rita Marker and by Wesley J. Smith tell it like it is.  Take a look at the Culture of Life Foundation too.

Then mention these “health care” options to people you know, just to get them thinking.  Ask what they think about the options and toss in one or two facts that you think might be relevant to the conversation.

Speak out against attempts to normalize suicidal “health care” options.  For example, a bill for legalizing doctor-prescribed suicide has been introduced to the Indiana state legislature every year since 2017.  One short paragraph on one danger of doctor-prescribed suicide sent to your local newspaper or posted on your social media page may help persuade members of the state legislature to oppose the bill.

Practice one of the corporal works of mercy: visit the sick.  Visit the chronically or seriously ill people you know to show them you care.  Show your appreciation for their caregivers by offering to do one of the caregivers’ tasks.  Volunteer to work at a hospice to show the patients that you value their lives.

The Lord has done great things for us.  Let us rejoice and be glad!