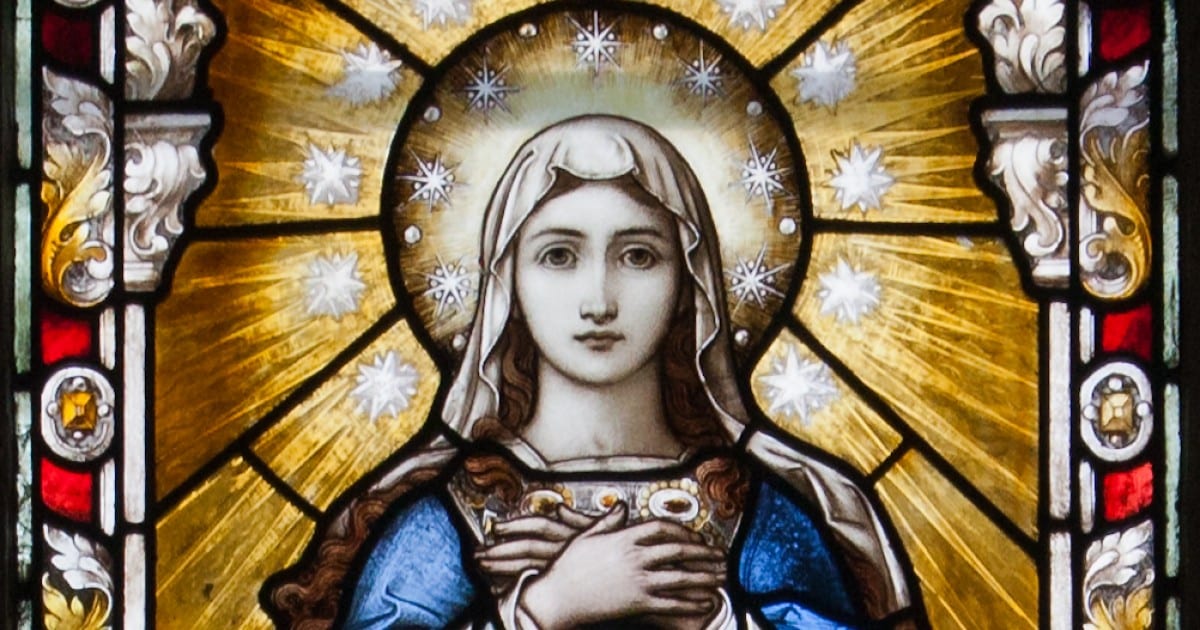 I admit it.  There have been times when I questioned Catholic reverence to Mary.  Was I prioritizing her over God?  Is the Protestant faith accurate in its claims that honoring Mary has no Biblical grounds?  Would an independent Bible reading give me the knowledge I need to answer these questions?  After reading Dr. Brant Pitre’s book, Jesus and the Jewish Roots of Mary, I say, no!  In the introduction, he writes, “You simply cannot understand Mary without looking at her in her first-century Jewish context.  Scholars today agree that Jesus can be fully understood only from within the Judaism of his day.  However, when it comes to Mary, the same rule does not seem to apply.”  Dr. Pitre sets out to change this because to examine ancient Jewish texts and traditions is to see evidence about why we honor Mary.  He clearly explains the metaphors and parallels about Mary that Jews from the first century would have known. For example, why is the pain of labor a metaphor for Jesus’ passion and death?  And finally, why is Mary called the Queen of Heaven and considered an intercessor?   How is she the new Rachel?  If you want a charitable response when somebody claims that Catholics idolize Mary, then this book will prepare you.

It is impressive that Dr. Pitre could pack so much information, so clearly, into 198 pages!  Many fascinating metaphors and parallels are covered in Jesus and the Jewish Roots of Mary, but I will focus on only a few.  Before doing so, however, it is helpful to touch on the difference between a metaphor (in this case, probably more an extended metaphor) and parallelism.

When a woman is in labor, she is in anguish because her hour

has arrived; but when she has given birth to a child, she no

longer remembers the pain because of her joy that a child

has been born into the world.  So you also are now in anguish.

But I will see you again, and your hearts will rejoice, and no one

will take your joy away from you.

Why would Jesus use such a metaphor, Pitre asks? Yes, it is an example of “extreme pain and extreme joy”, but there is much more.  First, Jesus referred back to the Jewish idea of the “painless birth of the Messiah” found in Isaiah 66:7.  “Before she is in labor, she gives birth;/Before her pangs come upon her, she delivers a male child.”  In this prophecy a woman gives birth without pain, signifying that the sin of Adam and Eve has been undone.   On the other hand, Micah 5:2-3 also gives a prophecy of the mother of the Messiah.  Unlike Isaiah, she will suffer pains of birth because, as Jewish tradition interprets it, this is the “birth pang of the Messiah.”  To a first-century Jewish person this symbolized tribulations to precede the age of salvation.  Bringing it forward to the New Testament, Dr. Pitre concludes, “Mary was spared the ordinary pain of childbirth precisely because she would not be spared the extraordinary pain of watching her son die upon the cross.” Ancient Christians believed that the suffering of Christ and his mother at the cross fulfilled the prophecy of Isaiah and Micah.  Furthermore, we see the metaphor of birth pains continue into Revelation 12. 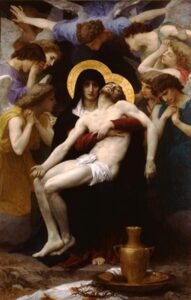 A great sign appeared in the sky, a woman clothed with the sun,

with the moon under her feet, and on her head a crown of twelve

stars.  She was with child and wailed aloud in pain as she labored

to a son, a male child, destined to rule all the nations with an iron

rod.  Her child was caught up to God and his throne.

Despite the mention of a birth, Pitre states that Revelation 12 “is not a literal description of the mystery of the nativity; it is an apocalyptic depiction of the mystery of the cross.”  This simply cannot be depicting Jesus’ birth, because He was visited by the three kings and not “caught up to God.”  This is so subtle!  I always enjoy reading Revelation, but this makes it even more fascinating!

Parallelism is used to make an idea stand out or to be memorable.  It also involves a repeated grammatical structure.  We have all noticed the parallels repeated from the Old Testament to the New Testament.  For example, in Isaiah 64:1-2, Isaiah wishes for the heavens to be torn (schizo) open.  This wording then reappears in Mark 1:10, when he writes “And when he came up out of the water, immediately he saw the heavens opened (schizo) and the Spirit descending upon him like a dove…”  I find Dr. Pitre and other writers, such as Edward Sri, very helpful because their knowledge of Greek and Hebrew adds depth to our understanding.  We will see another example of this parallel in the next topic. 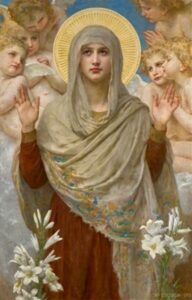 The Litany of Loreto provides a myriad of names for Mary.  Sometimes she is referred to as Mother of Good Counsel or Queen of Heaven.  Why is this?  Dr. Pitre explains this by comparing the prophecies of the Old Testament with the fulfillment in the New Testament.  In the ancient Jewish time of monarchies, the queen was not the wife of the king but the king’s mother.  She was a confidant to her son and was considered a mediator between the king and his kingdom.  Another name for Mary, Comfort of the Afflicted, is a metaphor of Mary as intercessor.  It is also a connection between Rachel (of Genesis) and Mary.  There are many fascinating parallels between these two women that are evidence for the claim that Mary is the new Rachel.  Dr. Pitre reminds us that Rachel was the wife of Jacob, the father of the twelve tribes of Israel.  She was also the biological mother of Joseph, savior of the Jews in Egypt.  Again, we notice parallelism in “the opening” of something; however, instead of the heavens opening, it is Rachel’s womb!  “Then God remembered Rachel. God listened to her and opened her womb. She conceived and bore a son, and she said, ‘God has removed my disgrace.’  She named him Joseph, saying, ‘May the Lord add another son for me!’”   Furthermore, while giving birth to his younger brother, Benjamin, Rachel dies.  Joseph later “gives him special honor” which is paralleled to Jesus giving his disciple John the title of “beloved.”  Rachel is buried on the road to Bethlehem, where Jewish and Muslim followers still visit her burial site.  She became a popular intercessor because, according to Dr. Pitre, Rachel is responding to “her children who have been killed and driven out of the promised land.”

Thus says the Lord: In Ramah is heard the sound of sobbing,

bitter weeping!  Rachel mourns for her children, she refuses to be

consoled for her children—they are no more! (Jeremiah 31:15)

Written in 6th century B.C., Jeremiah remembers Rachel as “the classic mother who mourns and intercedes for her children,” just as Mary does for us.

These metaphors and parallels are just a few of the fascinating connections that Dr. Pitre makes for his support to honor Mary, Queen of patriarchs.  I especially appreciated the style of Dr. Pitre’s writing.  He repeatedly returns to the passages in the Bible to peel away the layers of symbolism to reveal a deeper understanding of why we still practice these ancient traditions. His knowledge of Hebrew and Greek allows him to explain the nuances of each word.  His understanding and application of ancient Jewish text beyond the Old Testament are why this book is praiseworthy.  I have mentioned just a few reasons why I recommend this book.  I hope you find your favorite connections, as well.  To Jesus through Mary!