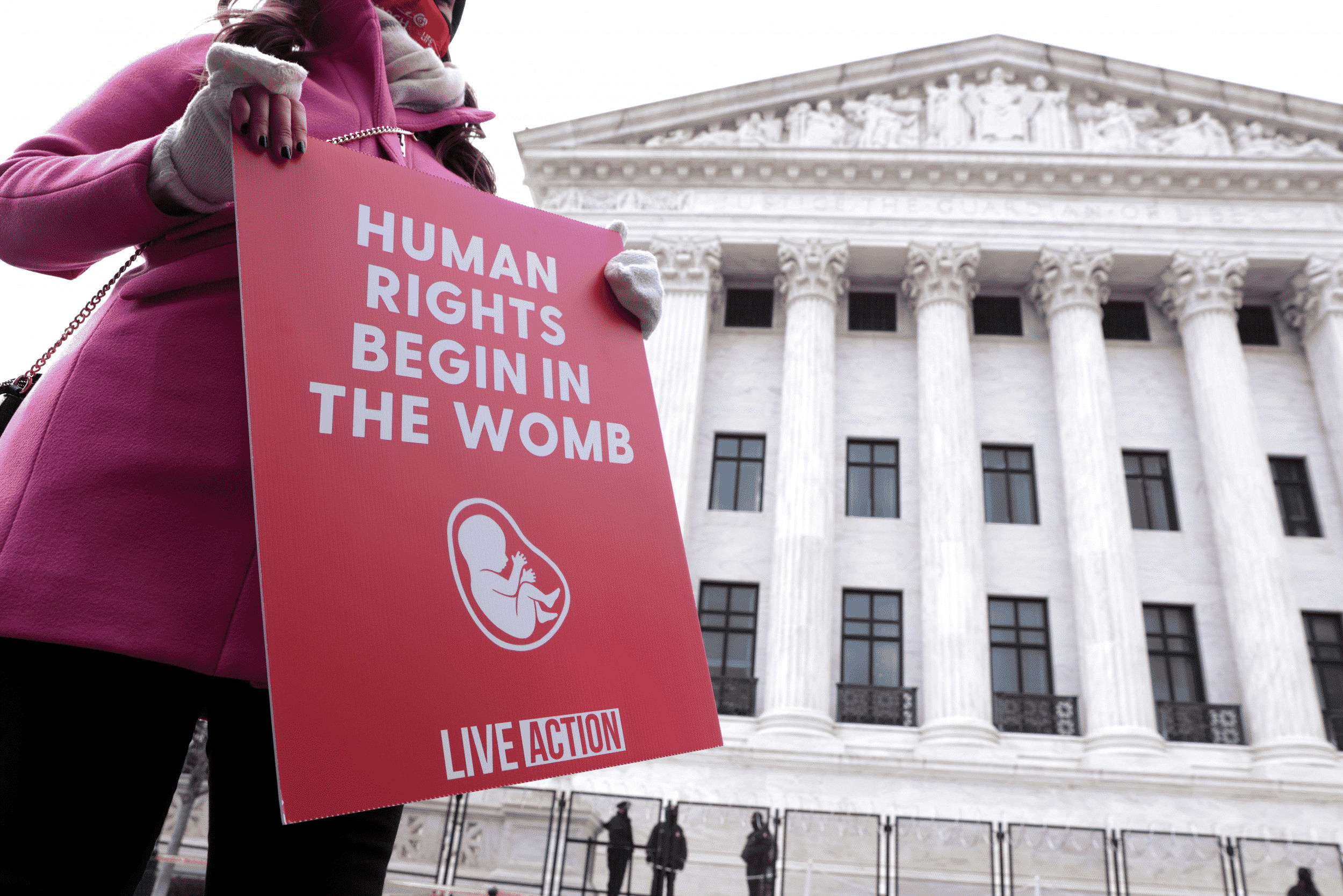 We have been enslaved by the crimes of abortion for nearly five decades. It’s an atrocity. Over 60 million children have been murdered in the bloodbath of legalized abortion (cf. Archbishop Cordileone interview). The abortion mindset – godless sovereignty of self against the most vulnerable – has contaminated the moral goodness of the soul of our nation causing the loss of authentic freedom. The Big Lie is that abortion is a choice freely made to solve your problem

As Roman Catholics we are deeply committed to promoting and defending the sanctity of human life. Love conquers all. But love is a verb not merely a feeling. We prove our love with action. Now is the time for such action to bring about the end of the scourge of legalized abortion:

On Dec. 1, 2021, the Supreme Court will hear Dobbs v. Jackson Women’s Health Organization, a case that is widely seen as the most momentous test of Roe to date. At issue is the constitutionality of Mississippi’s 2018 law banning abortion after 15 weeks of pregnancy. As one legal insider sees it, Dobbs represents the “best chance, the best facts, the best law” with which to finally overturn both Roe and Casey. – Catholic News Agency series on Dobbs.

Ever since the SCOTUS decision in Planned Parenthood v Casey 1992, the courts have held to an age of viability principle meaning that courts have struck down legislation that protects babies from being killed using abortion IF the child could not survive outside of their mother’s womb.

Imagine how much medical science, especially embryology and neonatal care, has advanced in thirty years. The implication of a favorable ruling is that viability of the precious unborn child would no longer be the standard therefore allowing many states like Indiana to further advance the protection and welfare of our children.

We have good reason to be optimistic. It’s unlikely SCOTUS would have agreed to take the case unless they had something to say. Of course the make up of the court is favorable to our just cause, yet a favorable outcome is far from certain.

Concomitant to the Dobbs case is the ongoing fury raged against the Texas Heartbeat Bill. The Supreme Court seems inclined to advance opposition to the law. The case may not be decided in the light of abortion per se, but rather on the mechanism built into its enforcement. The law does not criminalize abortion instead it permits the citizenry to sue for damages in court for those aiding or performing abortion. Justices may have a real concern about the implications and wide use of this legal procedure since it does seem to allow judges themselves to be sued. One can easily imagine why it’s contentious on that matter alone.

But we cannot lose sight that abortions across Texas have been almost ended. In a few decades there may be ten of thousands of young men and women living productive lives of their own.

“Human life is sacred and inviolable at every moment of existence, including the initial phase which precedes birth. All human beings, from their mothers’ womb, belong to God who searches them and knows them, who forms them and knits them together with his own hands, who gazes on them when they are tiny shapeless embryos and already sees in them the adults of tomorrow whose days are numbered and whose vocation is even now written in the “book of life” (cf. Ps 139: 1, 13-16). There too, when they are still in their mothers’ womb-as many passages of the Bible bear witness-they are the personal objects of God’s loving and fatherly providence.”

A third issue in need of our prayers and action is the House Bill (HR 3755) slithering its way through Congress. It is wicked legislation to be sure. The diocese of San Francisco wrote recently:

“HR 3755, the misnamed “Women’s Health Protection Act of 2021,” shows to what radical extremes the supposedly “Pro-Choice” advocates in our country will go to protect what they hold most sacred: the right to kill innocent human beings in the womb.”

“A child is not an object to be thrown away, and neither is a mother’s heart. I’ve said it before and I’ll say it again: the answer to a woman in a crisis pregnancy is not violence but love. This is America. We can do better.”

Many of us wonder why is America so divided? Division is one of the most insidious principles of demonic action. Abortion definitively separates parents from their children in this life. Abortion, unreported of, separates souls from their Creator. And abortion is tearing our country apart.
In this context our hearts yearn for reconciliation and unity. There can be no unity without Truth, which illumines the intellect, and the Good, which all earnestly seek to possess.

“It is therefore a service of love which we are all committed to ensure to our neighbour, that his or her life may be always defended and promoted, especially when it is weak or threatened. It is not only a personal but a social concern which we must all foster: a concern to make unconditional respect for human life the foundation of a renewed society

“We are asked to love and honour the life of every man and woman and to work with perseverance and courage so that our time, marked by all too many signs of death, may at last witness the establishment of a new culture of life, the fruit of the culture of truth and of love.”

Certainly the fight for justice and mercy for children in danger of abortion, mothers violently deprived of their children, fathers cruelly forsaking their God-given responsibilities, and the workers of death is a long road of bloody sacrifices and suffering.

In the holy and immutable Divine Plan of Salvation and by His Grace it will end.

As disciples of Christ the King we are called into his loving service and to walk side by side with each.

“By virtue of our sharing in Christ’s royal mission, our support and promotion of human life must be accomplished through the service of charity, which finds expression in personal witness, various forms of volunteer work, social activity and political commitment.”-