Considerations on the Feast of Our Lady of Lourdes 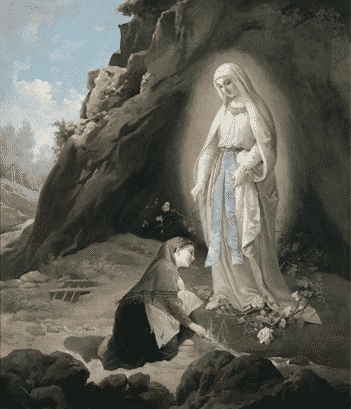 Let us consider The Blessed Virgin Mary, Our Heavenly Mother, in the specific context of the United States of America and its Catholic hierarchy.  Let us consider the works of our founding bishops, beginning with Monsignor John Carroll the first Catholic Bishop for the entire United States of America, then through the Bishops who advanced the Dogma of The Immaculate Conception, and to the Bishops through the 1950’s who obtained our National Marian Shrine Church while preaching cogently and distinctly the true Gospel of Catholic Faith and morals.

Indeed those apostolic efforts yielded such good spiritual fruit in the life and society of our Nation, until the time when The Blessed Virgin Mary offered the American hierarchy a simple means, an exceedingly wonderful religious pathway, to purity.  [After first appearing as Our Lady of Lourdes (https://www.lourdes-france.org/en/) in September 1956, The Blessed Mother appeared as “Our Lady of America” to Sister Mary Ephrem, C.Pp.S. in Indiana, and again in Ohio.] 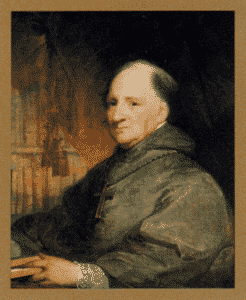 At the outset, we can say that the United States of America would not have persisted and defeated the British Empire without a Papal intervention initiated by Monsignor John Carroll, our first Bishop. In 1781, Bishop Carroll persuaded  Pope Pius VI to prevail upon the Catholic French King, Louis XVI, to order the French naval fleet to confront the British fleet at the mouth of the Chesapeake Bay, thus isolating the British Army at Yorktown, Virginia, and forcing the surrender by General Charles Cornwallis to General George Washington.  We know this because the British King, George III, actually acknowledged this key role of Pope Pius VI influencing the King of France in a conversation which King George had with the British Prime Minister, William Pitt (The Younger).

It is likely the U.S.A. would most likely not even exist without the Catholic hierarchy having induced the King of France to aid the Continental Army of General George Washington in its definitive defeat of the British at Yorktown.

Consider just some of the first generation of exceptional Catholic bishops of the United States of America. 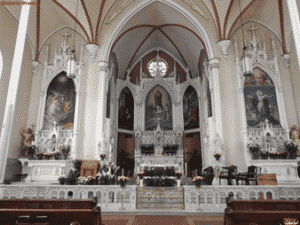 Consider just some of the first generation of bishops who unanimously endorsed this dogma in the 1846 Provincial Council of Baltimore — including John Baptist Purcell and Richard Pius Miles. Note well that the bishops of our nascent republic helped advance the dogma of the Immaculate Conception for the decade following that 1846 Council.  Bishop Purcell of Cincinnati, years before the dogma was proclaimed, bought the land where he ultimately erected the Church of the Immaculata, a famous landmark on Mount Adams in Cincinnati and a virtual ‘lighthouse’ for the Ohio River. This parish church became a widely recognized shrine to the Immaculate Conception, venerated long before the U.S. bishops built the shrine church by that name at our national capital.  Bishop Purcell also successfully persuaded the local secular government authorities to declare an official holiday on December 8, 1854 closing businesses in Cincinnati to honor the papal declaration of the dogma on that day.

Monsignor Richard Pius Miles (the first bishop of Nashville and a native of Maryland who grew up in Kentucky) participated in advancing recognition of the Immaculate Conception dogma, both at the Sixth and Seventh Provincial Councils of Baltimore (held in 1846 and 1849, respectively). When the diocese of Nashville, in 1972, sought to move his tomb from under the main altar at the former cathedral, the Church of St. Mary of the Seven Sorrows — after 112 years — his body was found incorrupt.

While Monsignor John Nepomucene Neumann was not named a bishop until 1852 and thus did not participate in these particular Provincial Councils, he did play a prominent role in the actual papal proclamation of the Dogma of the Immaculate Conception.  He was personally selected by Pope Pius IX (alone among all of the bishops and cardinals present that day) to hold the original document while the Pope read aloud the apostolic constitution Ineffabilis Deus in the Vatican Basilica of St. Peter on Dec. 8, 1854.  Of course, this Bishop of Philadelphia is today known as Saint John Neumann.

America continued to produce distinguished Catholic bishops even after the founding generation.  Before World War I, the U.S. bishops — through the effort of Msgr. Thomas J. Shahan, rector of the Catholic University of America — obtained papal approval for a national shrine church at Washington, D.C. honoring the Immaculate Conception.  There had been discussion about such a monumental church as early as 1846 (when the Sixth Provincial Council dedicated the nation to the Immaculata). Monsignor Shahan proposed the shrine church in 1910 and obtained the personal approval of Pope Pius X in 1913.  The pope named Shahan a titular bishop in 1914, and the monsignor continued as head of Catholic University until 1928.

Along with many other bishops (such as John Francis Noll of Fort Wayne, Indiana), this early–20th–century episcopal generation advanced the construction of the National Shrine of the Immaculate Conception.  With its cornerstone laid in 1920, by 1931, a crypt level was opened and a distinct chapel of Our Lady of Lourdes was built.  Despite being impeded by the Great Depression and World War II, the bishops persevered, and under the leadership of Bishop John Francis Noll, the construction of this national Marian shrine church began in 1954.  The completed structure was dedicated in 1959.  In the interim, the U.S. Catholic bishops formed a vanguard of prominent leadership throughout the nation.  In 1934, another Cincinnati archbishop, John T. McNicholas, founded the National Legion of Decency to combat pornography, especially in motion pictures.

In November 1947, the U.S. bishops, in their National Catholic Welfare Conference annual meeting at Washington, issued a valiant statement: “Secularism — Root of World’s Travail.”  Consider these brief excerpts from that landmark document:

“No man can disregard God — and play a man’s part in God’s world.  Unfortunately, however, there are many men — and their number is daily increasing — who in practice live their lives without recognizing that this is God’s world.”

“This, in essence, is what we mean by secularism. It is a view of life that limits itself not to the material in exclusion of the spiritual, but to the human here and now in exclusion of man’s relation to God here and hereafter. Secularism, or the practical exclusion of God from human thinking and living, is at the root of the world’s travail today.”

“Secularism, in its impact on the individual, blinds him to his responsibility to God. All the rights, all the freedoms of man derive originally from the fact that he is a human person, created by God after His own image and likeness. In this sense, he is ‘endowed by his Creator with certain unalienable rights.”

“Secularism has wrought havoc in the family. Even the pagans saw something sacred in marriage.”

“In no field of social activity has secularism done more harm than in education.”

“In the international community, there can be only one real bond of sane common action — the natural law, which calls to God, its Author, and derives from Him its sanctions. There is objective right and objective wrong in international life.”

“Secularism, which exiles God from human life, clears the way for the acceptance of godless subversive ideologies — just as religion, which keeps God in human life, has been the one outstanding opponent of totalitarian tyranny. Religion has been its first victim; for tyrants persecute what they fear.”

“In the dark days ahead, we dare not follow the secularist philosophy. We must be true to our historic Christian culture.”

Why wouldn’t Our Lady of America reasonably expect, with “no special sign” to prompt the Catholic bishops of this new nation, that they would hold that solemn procession and grant the permanent emplacement of her likeness (one in which she displays Her Sorrowful and Immaculate Heart and holds out the Lily of Purity) in the National Shrine Church of The Immaculate Conception?  The Bishops of the United States of America clearly instigated the Papal Declaration of the dogma of The Immaculate Conception.  Their original leader, Bishop John Carroll, named the original Cathedral at Baltimore after the dogma of The Assumption.  What else could and should Our Heavenly Mother expect?  That they would act with alacrity on an offer of the supernatural virtue of purity.  One would think so.

Undoubtedly Our Heavenly Mother knew that purity as the gateway to the realization of the Indwelling Trinity in U.S. citizens would mark a great turnaround — beginning in the American republic and spreading like wildfire throughout the face of the earth.  Time is short, very short.

Let us pray that the prudent and zealous Catholic bishops of the U.S.A. get this done.  They could and should start by advancing that solemn procession and permanent placement of an Our Lady of America statue in the National Shrine of the Immaculate Conception!  Why would not The Empress of this continent, the most loving of human creatures, seek also to become our national Queen, especially given our historic stellar national episcopate now holding forth in The Church Triumphant.  Neither the current U.S. bishops nor the Catholic lay faithful “deserve” such special treatment with such indifference to valid special signs from Heaven, but those bishops who have gone to Heaven long ago and now hold forth in The Church Triumphant do warrant such special gifts from Our Lady of America.