The Unnamed Evil of Our Time 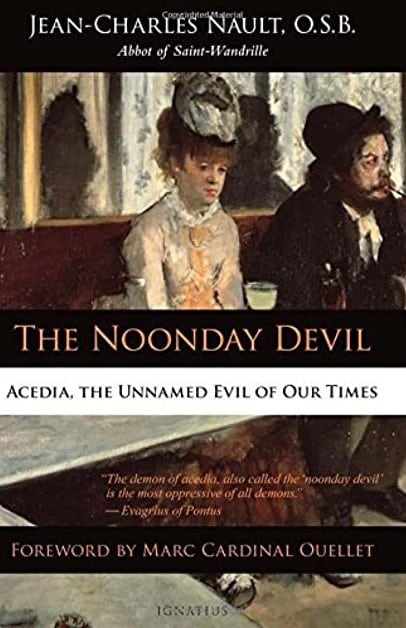 A woman sits in a café, a hat adorns her head and the latest fashion her body.  She appears to be at leisure since she partakes in a midday spirit (or maybe more).  The hum of conversation floats about her as her eyes fixate on some imaginary world.  Sitting as though a rag doll, her shoulders slump and her feet splay widely as she forgets her lady-like manners.  A companion, tired of the uncomfortable silence, looks elsewhere for interesting banter.  It’s the woman from Edgar Degas’s painting, “The Absinthe Drinker” (1876), and although she appears to be drunk, her description could easily be applied to somebody experiencing despair.  This painting is on the cover of such a topic in Jean-Charles Nault’s book The Noonday Devil: Acedia, the Unnamed Evil of Our Times.  It turns out that while acedia is very much a contemporary spiritual trial it has been named much earlier than 2013 when this book was first published.  The Desert Fathers, like Evagrius of Pontus, St. Thomas Aquinas, and others have studied this “noonday demon”.  This timely book, written by an abbot of the Benedictine Abby of Saint-Wandrille, teaches us what acedia is, how it affects Christians today, and how we can remedy it.

Many definitions of acedia have been offered throughout the years.  Evagrius defined it as “a relaxation of the soul or a lack of spiritual energy.”  In the foreword of the book, written by Marc Cardinal Ouellet, acedia is defined as “[w]eariness, melancholy, feeling overworked, discouragement, instability, activism, boredom, or depression.”  It is particularly nefarious since it simultaneously affects the physical and spiritual passions thereby taking advantage of weakness on two fronts.  Since these results negatively affect both the body and soul, it becomes, as Nault describes, “a radical, chronic evil that connects multiple vices into one evil.”  Therefore, it can even hit those who actively seek a Christian relationship, as we will discuss.

The existence of acedia was initially recognized during the experiences of the Desert Fathers (340 AD) and later the monks under St. Benedict (480-547).   Monks would experience situations such as wanderlust, aversion to physical work, and dislike for prayer.   The study of such behavior led to the discovery of acedia.  These findings later influenced other theologians who realized that acedia affected the laity, as well.

St. Thomas Aquinas (1224-1274) recognized that acedia negatively affected a person’s spiritual life.  For this reason, Nault dedicates a quarter of his book to the teachings of St. Thomas and the later shock that happened in moral theology.  Nault skillfully clarifies sections of Aquinas’s Summa Theologia that apply to acedia.  Then he gives Aquinas’s definition as “a sadness about spiritual life (or God)” and “a disgust with activity.”  A disconnected relationship with God directly affects our ability to act in charity toward our neighbors.  If we do not practice interior virtues, then this disconnects us from practicing virtuous acts.  Therefore, Aquinas warned that acedia is “the first sin against the joy that springs from charity.”  Furthermore, St. Thomas aligned his study of the concept of freedom with the philosophers of Antiquity and Christian tradition.  As Nault points out, this is critical because these thinkers viewed freedom as “the ability that man has—an ability belonging jointly to his intellect and will—to perform virtuous actions. . . when he wants and as he wants.  Man’s freedom is therefore his capacity to accomplish good acts easily, joyously, and lastingly.  This freedom is defined by the attraction of the good.”  However, Nault then briefly covers the “revolution” of a Franciscan friar, William of Ockham (1300-1350), who contradicted prior understanding of moral theology.  Ockham “makes freedom a moment ‘prior’ to intellect and will…the word ‘freedom’ is almost synonymous with ‘will.”  Therefore, by removing the priority of the will and intellect, freedoms become merely actions without context or proper ordering.  This leads to legalism.  I can do this action because the law says it is good (i.e., abortion).  Or, I cannot do this action, because the law says it is not good (i.e., COVID mandates). This asserts rights without affirming the worth of human abilities to make a virtuous choice between multiple actions.  However, in our culture, we recognize how replacing intrinsic morality (God) with extrinsic morality (laws) fails to improve happiness in our life.  Charles Taylor, in his essay “Atomism”, writes convincingly that rights cannot be separated from the well-ordered development of our convictions.  He points out the incoherence of ascribing rights to human beings while simultaneously being indifferent—or outright detrimental—to moral development.  This philosophical change affects our spirituality today since it encourages the idea that access to rights takes priority over obligations to society.  Nault summarizes St. Thomas’s advice when he writes, “Prudence is the virtue of practical reason that enables man, in all circumstances, to choose what is most in conformity with good…whichever increases according to God’s plan for him.” Our disordered morality (individually and publicly) continues to haunt our spiritual castle and Nault, in part three of his book, tells us how.

In “The Relevance of Acedia in the Christian Life” Nault highlights the three manifestations of acedia.  The first is what he calls “the disintegration of the human person.”  The two factors involved in this manifestation are the feeling of acute nihilism—a loss of meaning—and the temptation of despair.  This is especially true for those who place their faith in man, science, and/or material things.  When these idols fail to provide for our spiritual needs, all that is left is an empty void.  Nault includes a quote by Joseph Ratzinger that is all too accurate.  “… [M]an, who only wanted to be his own creator and to reassemble creation himself with a better form of evolution he had thought out himself—this man ends in self-negation and self-destruction.  He finds it would be better if he were not there.”  The second manifestation is the spatial dimension (the cell) where a person experiences wanderlust and constantly seeks novelty.  He “passes through” on his spiritual journey rather than “passing beyond” towards higher-ordered things.   This is also a “flight from self and ultimately a flight from God.”  He fears being alone because it forces him to reflect on his conscience.   He becomes faint of heart because he rejects God’s plan for him “to become sharers in the divine nature.”  In the Garden, he wanted to be like God; today he does not want to exist.  This is still a rejection of humility since he thinks that he is not worthy of God’s love.  Finally, the third manifestation is the temporal dimension (the sixth hour).  Think of noon when time seems to stand still.  The Christian fails to notice spiritual progress and becomes unmotivated in her prayer life.  She experiences the temptation of doubt, especially when she regrets decisions made throughout her life.  Her lack of hope is evident in a common experience of a “mid-life crisis”.  Mediocrity sneaks into her life and she becomes neglectful about “the little things.”  Attempting to replace the void of goodness, she is affected by any or all the following—mental flightiness, gossiping, physical agitation, or activism. 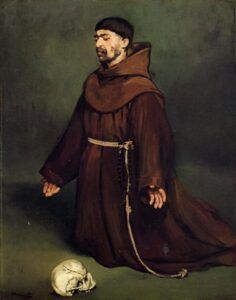 Abbot Nault sums up the remedy to acedia in two powerful words—joyful perseverance!  Stand fast in your calling as a disciple of Christ.  He tells us to “recall the marvels that God has accomplished in history, but also in my personal history, above all to recall Christ Jesus, and to do so in the routine of everyday life.”  Regularly attend Mass and receive the Eucharist. “The Eucharist is what gives temporality its ultimate meaning since it takes up the past, the present, and the future: love never passes away (1Co 13:8).”

Remain joyful!  As a Carthusian monk wrote, “Sadness is looking at oneself; joy is looking at God.”  Practice the beatitudes to strengthen your relationship with God and others.

Do not allow yourself to think your spiritual good is lacking and that there is no point to charity.  When you feel that you cannot possibly do another mundane task, then challenge yourself to recall the famous Benedictine maxim, ora et labora, which reminds us to set aside our own needs and to think of God and others first.  Call on the Holy Spirit to help you attain fidelity with God.  As Abbot Nault tells us, we are connected to Christ by the Holy Spirit.  Christ is our example, and the Holy Spirit is our spiritual nourishment.  If we forget that these two are connected, then our acedia becomes a mere melancholy, a mental sadness.  However, as Christians, we know it is a spiritual sickness that manifests itself into physical pain, and potentially the loss of eternal life.  From the perspective of a stay-at-home mother, there are many ways that I can remain joyful.  I can pray for those whose clothes I fold.  I can be thankful for the food that I clean from my dishes.  Finally, I can be grateful towards the modern amenities that need cleaning—yes, even the toilet!  Start to recognize the noonday devil in your life.  What actions can you do to break its chains on you?