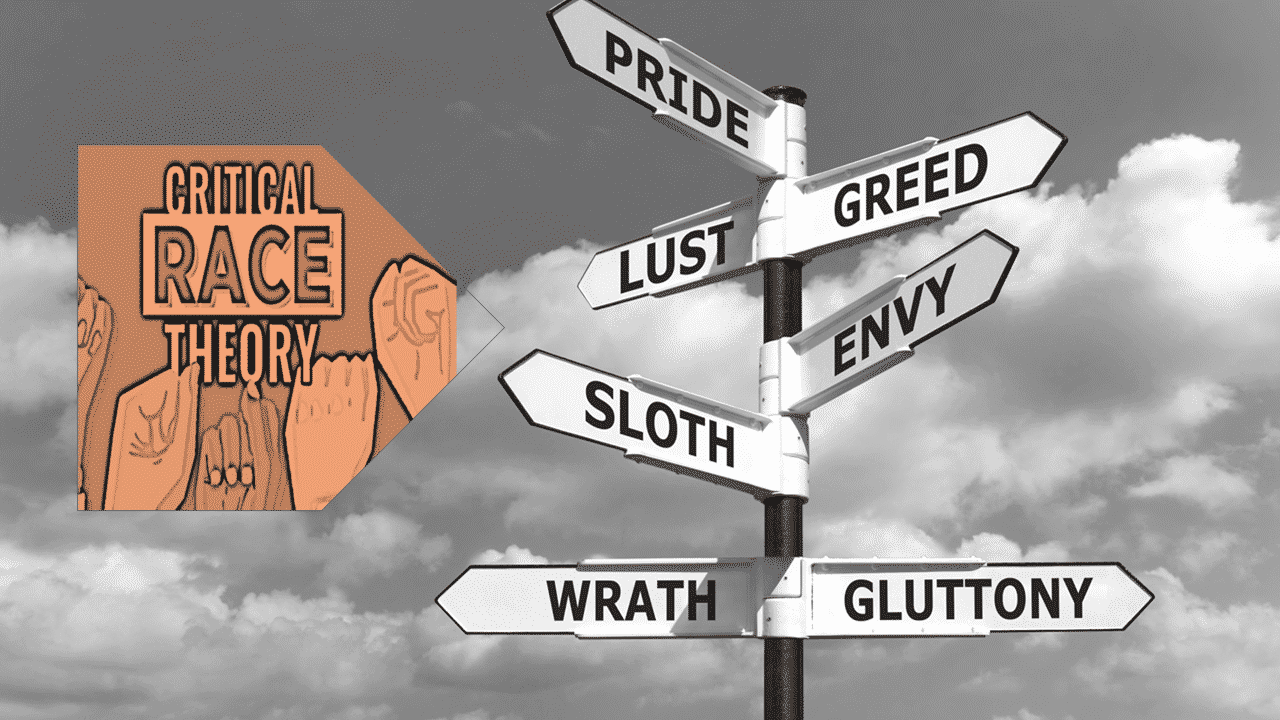 Public news media and other instruments of social communication, Marxist professors and teachers, progressive politicians,  misguided clergy, mislead parents, and many others are drowning in an ocean of distorted vocabulary and evil intentions under the expression, “Critical Race Theory”.   Following its fallacious ideological precursors, “Critical Legal Studies” and “Political Correctness”, Critical Race Theory is based on false assumptions and imperious logical fallacies, morphing the classic economic “class conflict” fallacy into racial and other identity– based neo–Marxist fabrications.  CRT proponents have capriciously contrived for those they have so arrogantly deemed to be unduly deprived a neo–Marxist movement designed to foster irrational disruption, inane violence, and eventual revolution.  This monstrously false construct aims, at every turn, to destroy Christendom, the Rule of Law, and the traditional nuclear family.
Succumbing to the Sirens’ songs of diversity, inclusion and equity, many ill-advised persons, especially youth, are plunging into a CRT ocean of envy, rash judgment, detraction,  calumny, hostility, and revolution, along with all the other capital vices.  Swept into this evil current, they incline their lives toward eternal destruction in Hell, rather than eternal life in Heaven.  Like the Marxist–Socialism of the last century, CRT originates in the capital vice of Envy, that vice which marks Satan, the Father of Lies.  CRT aims to have people resent the goods of others as did Satan when he tempted Eve to resent being deprived of the fruit, and of the touching, of that single tree decreed off–limits “in the midst of the garden”. [Genesis 3:3 (R.S.V.)]   This demonic envy itself originated when Lucifer made his futile revolutionary  grasping for equality with God, lost his place in Heaven, was denied forever the Beatific Vision, and was replaced by Saint Michael, Archangel.  The Angelic Doctor explains this capital vice of envy with a comparison in relation to the good of our neighbor:

“Now the object both of charity and of envy is our neighbor’s good, but by contrary movements, since charity rejoices in our neighbor’s good, while envy grieves over it”.   [St Thomas Aquinas, Summa Theologica, IIa IIae, Q. 36, Art. 3, Rispondeo dicendum quod (New York: Benziger Bros, 1948), pp. 1344–1345]

This evil orientation is so visible with the CRT advocates.  CRT is all about grieving over the goods of others, and fostering avarice (greed), coveting the goods of others.  Devoid of the true virtue of charity, CRT also begets wrath (unjustified anger) and many other vices.  In contrast, consider what Saint Paul teaches:

“Love is patient and kind; love is not jealous or boastful; it is not arrogant or rude. Love does not insist on its own way; it is not irritable or resentful; it does not rejoice at wrong, but rejoices in the right.  Love bears all things, believes all things, hopes all things, endures all things.”
[1 Corinthians 13:4-7 (R.S.V.)]

These CRT pseudo–ethical ideas have been building up for a long time.  Like the frog in tepid water, the typical Catholic Christian has gone along with much nonsense and inherently evil ideas, served up in the popular culture since at least the 1960’s.  For example, this week the apparent offspring of one of the Beatles, Julian (son of John) Lennon recorded for the benefit of the cause of Ukraine, the now famous song, “Imagine”.  Ever so subtly, this beautiful melody supports a blatant anti–Christian creed, lyrics in direct opposition to key elements of the Apostles Creed.  Even to sing consciously these lyrics, would it not be an act of apostasy by a Catholic Christian?